So I’m pretty much Full House obsessed. In fact, my first crush ever was

So imagine my excitement to learn that it was coming to Netflix. I immediately knew the occasion called for a VIEWING PARTY.

It was also time to sign up for Netflix (I’m always 5 years behind!) 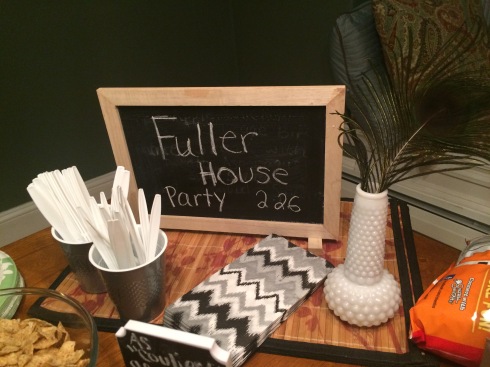 So what does a Full House viewing party consist of?

I will break it down for you!

*Full House Trivia Game–Everyone loves a good trivia game, and I made sure to find a hard one (because my friends are all diehard Full Housers). The best score was a 60.

*Cups with Your Favorite Full House Phrases: It’s fun to have themed cups. Some nostalgic phrases include:

*A Pre-Party YouTube Full House Playlist: This was playing on the TV to amp everyone up while I was waiting for guests to arrive.

*Theme Food: We had some Katsopolis Kalzones, P-I-Z-Z-A (from the Olsen Twin’s sleepover party), etc. Come up with a cool theme name and you’re golden. I also love these little chalkboard stands that I bought at Party City. 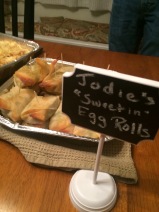 *Gibbler “Birthday” Cake: No one can forget the episode where DJ FORGOT her best friend’s birthday. She had to throw together a surprise party with whatever she had hanging around.

She then defrosted a hashbrown “cake” and used ketchup for the frosting. This recreation was a crowd pleaser, although I couldn’t get the ketchup to nicely write “Fuller House.”

*Rad Graphic Designs: Luckily for me, I date a graphic designer who indulges my crazy ideas, and made these for me. I never want them to be taken off the walls. I think they can make any home look even better. 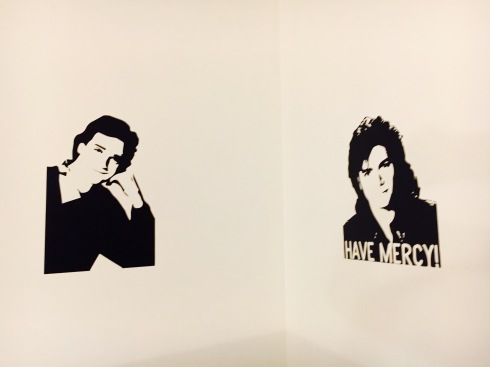 *Mr. Woodchuck’s Cider: Because why not? Mr. Woodchuck was a vital character, and I’m glad he invented this cider as an alternative to beer, because beer hurts my stomach.

*Have Mercy Shots: The plan was to take one of these every time Uncle Jesse or any character said “Have Mercy!” which actually didn’t happen too much. These shots were delicious, a combo of vodka, coconut rum, and lemonade.

Overall Thoughts on the Show: I loved the fun and nostalgia of seeing our favorite characters, and finally knowing what they are up to in the present. I’m glad creator Jeff Franklin is back to recreate the story he wanted to tell. (I learned a lot from reading this article about how storylines diverged from where he wanted them to go).

I wish there were more of the “adults” involved in each episode. As a diehard Uncle Jesse fan, I just wanted MORE. I have only completed 7 episodes, so I’m glad I still have more to see. So far, Kimmy Gibbler has made the show, and she is seriously funny. Can’t wait to watch more.

Be sure to throw your own Fuller House viewing party soon. I’ve had two more since the initial one on Friday. (The second was way crazier)!